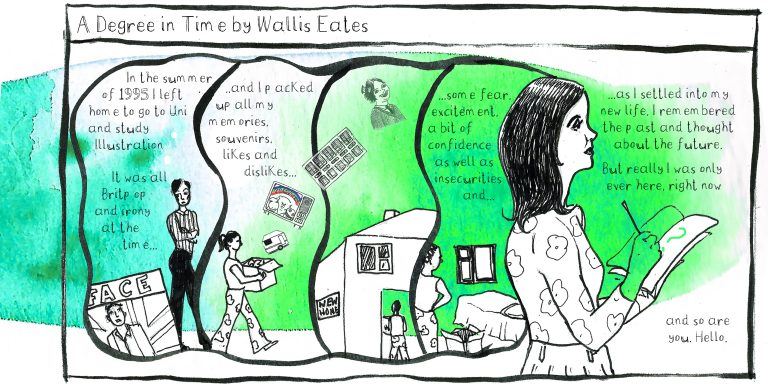 Born in mid-October, in the mid-seventies, it’s no wonder orange would become such an important colour to me! I’ve always been partial to design from that era and an autumnal, rusty leaf. ‘Like an Orange’ is my latest project, but I would like to briefly share with you my journey up to this point, and why I do what I do.

I began drawing comics as early as I started reading them. My mum gave me a copy of a 1962 Judy annual when I was a young child, which was a wonderful gesture of sharing and connecting, as she had had this book when she was little girl. I grew up with just my mum in tall block of flats. I had no siblings to play with, and outside was a busy main road – nowhere to play there either. Instead, I found places to explore on paper, drawing characters in stories, sometimes entirely made up, other times a bit more like me.

In 1999 I went to the Royal College of Art to do a Master’s degree in Animation, following my Illustration BA (Hons) at Kingston University. The turn of the millennium had a wretched atmosphere, I found. This wasn’t helped by having been a victim of a violent crime and facing some very difficult challenges in my personal life. I felt lost and lacking in confidence for years after that, and kept my art practice to myself while I took cleaning jobs, retail work, and eventually became an office worker till the age of 39.

There was a crossover period though. Roughly two years before leaving my safe, secure job as a manager in a children’s charity, I’d entered into the UK small press and indie comics scene. A combination of therapy, two EFT sessions through my childhood friend Rhona, and doing The Artist’s Way by Julia Cameron, nudged me into producing drawings about the very issues that made me hide away, and so my autobiographical comic making began. All at once, through different means and connections, I was invited to submit a comic to ‘Steak Night Anthology 2: Work’, and to speak at the all women-lead graphic novel forum, Laydeez Do Comics. Both of these opportunities seemed to just suddenly appear in a strange and timely fashion.

I then entered the Myriad Editions First Graphic Novel competition and was shortlisted for my work-in-progress childhood memoir, ‘Mumoirs’. My world opened up and a year later I jacked my job in, despite knowing there’s no job security in comics – it was just that I found a space where I wanted to be, and felt I could be. At the start of 2015 I became an admin volunteer for Laydeez Do Comics, and then took over the helm for one year with Rachael Ball as co-founders Drs Nicola Streeten and Sarah Lightman went on a year sabbatical. I am now one of the core committee at what has now become LDC.

Coinciding with my new found world of comics, was also a desire to take art teaching into prisons, particularly personal storytelling through visual media as I had found this to be so liberating. Having been a victim of crime in my early twenties, as well as having family members go to prison, I’d been through a process that I felt would be valuable in this setting. Again, rather magically, it all fell into place and within months of leaving my job I became a practitioner for the charity Stretch, teaching Digital Storytelling in prisons. I never  imagined ‘Wings’ would be an outcome of this, but that is another story…

Since embarking on ‘Like an Orange’ and ‘Wings’, I have also worked with my local amateur boxing club, Double Jab, who are committed to social change, as well as adults with dementia in both artistic and research collaboration and in a volunteering capacity through Arts4Dementia at The House of Illustration.

My life experience and passion for creativity inform my collaborations as well as workshop sessions and teaching. To me, it all comes down to externalising those senses within, engaging with how we meet our world and bringing form to what resides inside. This doesn’t fix it, it allows for flow (so if something is stuck, draw it!).

And here is where we meet ourselves, each other, and our shared space.

As well as everyone I’ve mentioned above and included links for (and offer my eternal gratitude to), I am also delighted to include the following: 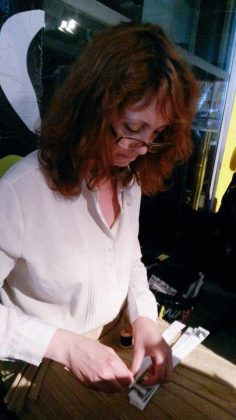